Read the adventure of Samara and Marcus who have to overcome class differences and the shadows of Samara’s past until they realize they are in love with each other.

Samara, property of a brothel owner, dreams of buying herself out of slavery and is willing to put even her life on the line for her freedom. Marcus, commander of the Roman legion who poses as a magistrate, needs to solve a crime and offers Samara a deal she can’t refuse: two years of loyalty in exchange for her freedom.

Samara is terrified of him, but finally agrees. Can Marcus convince her that he is different from her previous abusive master?

If you are a writer or reader of fanfiction, or are simply active in online fandoms or online communities, you have surely come across the debate concerning fanfiction and its supposed missing copyright protection. These online debates are scarcely filled with actual information, but rather an abundance of opinions disguised as facts. Many involved debaters seem to draw their info from their own set of morals, and argue on the basis of what SHOULD be law in their opinion instead of looking at what we are actually dealing with.

Since I myself became victim of not only plagiarism, but also copyright infringement several times last year, I decided to tackle the issue the way it makes most sense to me: by getting information. Not from the internet—instead I did a quick research for actual published works in the field of legal and cultural studies by professionals.

And I was right. I stumbled across Aaron Schwabach’s book “Fanfiction and Copyright – Outsider Works and Intellectual Copyright Protection”. Schwabach is a professor of law at the Thomas Jefferson School of Law in San Diego, California. One of his focus points is intellectual property. So his work provided an excellent starting point, for I knew I was dealing with a law professional who knows what he’s talking about. Which, in my world, is leaps better than dealing with opinionated people online who base their arguments on wishful thinking or obscure sources (“a friend of a friend” and so on).

Luckily, my university library was able to order his book from another library, since purchasing it from amazon (even the Kindle edition!) would have cost over US$100. So shout out and major credit to Free University of Berlin here, without whom I wouldn’t have been able to get my hands on the book.

Read more about whether you own the copyright for your fanfiction here.

Today I want to write a post about plagiarism and art theft. Mostly because recently I have become victim of it quite a few times, but also because it’s a topic that not many people seem to have an understanding off.

So let me start out with a basic definition of plagiarism.

Many people think that plagiarism only means copying another person’s sentence word by word. But legally it’s also plagiarism to take another person’s idea. Ideas, concepts or structure can also be plagiarized, provided they are an original composition.

The Legal Dictionary defines plagiarism as the following: The act of appropriating the literary composition of another, or parts or passages of his writings, or the ideas or language of the same, and passing them off as the product of one’s own mind.

Now why are there so many misconceptions about plagiarism then? It seems to be mostly because many people are under the impression that you can freely copy another person’s ideas as long as you don’t use their exact words.

To clear up some misunderstandings about plagiarism, I have compiled an article addressing 4 of the most common myths out there, that I myself have heard over and over again:

Myth #1 – You can basically retell the exact story of Harry Potter as long as you don’t name your character Harry Potter.

Myth #4 – Nowadays, everything is plagiarized, because everything has been written in some form before.

About 3 weeks ago, I released a free ebook called Stargate Aschen, a dystopian science-fiction novel borrowing characters from the popular television franchise Stargate. Since its publication, Stargate Aschen hit 750 downloads yesterday–which exceeds all my expectations.

To celebrate this, I created a little giveaway where you can win a Stargate Aschen Goody Box which consists of stickers, postcards and photoprints of my artwork for this and other stories.

All art was designed and created by Kimberley Jackson. All rights reserved. No unauthorized reproduction.

You can enter the giveaway by clicking the image below. Have fun! 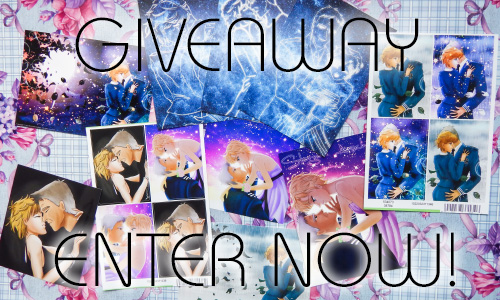 Now you can download my dystopian science-fiction romance “Stargate Aschen” as an ebook for free! Files are available for all devices. You can choose to either go for MOBI, Epub or PDF.

In the year 799 (Aschen calender), Earth is a colony under strict reign by an oppressive Aschen government. The Aschen have turned humans into slaves, and seized control over the entire planet, including the Stargate–a device that allows them to form a wormhole and travel thousands of light years across the galaxy to their home planet within seconds.

Humanity is at the brink of extinction. Due to advanced Aschen medicine human lifespan has almost tripled, but most of the human population is born infertile. Only a small percent of humans are so-called gifted ones, who are able to conceive/father children. Strict rules apply to these gifted ones, as the Aschen government wants to uphold the human population.

Samantha Carter is 25 years old. She has just come of age and undergoes her first fertility tests. When her tests turn out positive, her life is about to take a dramatic turn for the worse. Unwilling to accept a forced marriage and life in a breeding facility under Aschen control, she runs away from home to find the resistance and fight for the freedom of Earth as well as her own.

As she meets Jack O’Neill, camp leader of resistance Cell 4, neither of them realizes they are bound together by more than the mutual goal to free Earth from Aschen reign. Side by side, they fight to liberate their world from the oppression of an alien race using a second, secret Stargate found almost a century before in the Antarctica forests…

You can download your free ebook here, or, if you’d rather read it first, you can also read “Stargate Aschen” online.

Hey all you Stargate SG-1 fans out there,

I’m running a giveaway on my website at the moment, where I’m giving away three special edition postcards of my Stargate inspired art.

You can find all additional information here.

All the Feels & How to Deal

Romance and FanFiction Writing, Geek Stuff and who knows what else.....

Escapism at its oddest.

The Art and Craft of Blogging

NO.1 SAILOR MOON FANDOM IN VIETNAM

Kimberley Jackson is an author and artist who has published her works of fiction and art online since 2001.

my random ramblings about crafts, writing, books and kids

Thoughts and Tirades, Rants and Ruminations

girl, living in the far north, trying to think less and live more.

...where dreams are home.

The latest news on WordPress.com and the WordPress community.